Published by mesaofficercolloquiumchair on August 29, 2022

For this talk, we’ll start with a few paradoxes of infinity for you to mull over. I interviewed 23 undergraduate and graduate students (and one mathematician) about several such problems, including variants of the Ross Urns paradox. The way they experienced and resolved cognitive conflict provides insights about how infinite mathematical objects are mentally constructed.

Published by mesaofficerpresident on April 6, 2021

Immediately after the talk all students are welcome to join Dr. Kemp and MESA for an informal conversation via Zoom

Published by mesaofficercolloquiumchair on February 5, 2021

Published by mesaofficercolloquiumchair on March 9, 2020

Abstract:
The Flipped Math Study team has been observing Algebra 1 instruction in a wide variety of schools across the state of Missouri. Some teachers are using instructional videos in “flipped” lessons and others are teaching in conventional face-to-face ways, but the research team is finding some profound similarities in the instructional characteristics, even when looking across teachers who are using different textbooks. In this presentation, Dr. Otten will share the patterns of algebra instruction that they have seen across a wide variety of schools. And although there are important similarities in instruction, he will also share some of the preliminary differences that they are finding with regard to students’ learning as measured by a procedural-knowledge instrument and a conceptual-knowledge instrument.

Bio:
Samuel Otten is an associate professor of mathematics education at the University of Missouri. He received his Ph.D. from Michigan State University in 2012 and before that he also received a Master’s degree in mathematics from MSU and a bachelor’s degree from Grand Valley State University. His research centers on students’ participation in mathematical practices such as attending-to-precision and reasoning-and-proving, and he has recently become interested in studying digital curriculum materials and mathematics’ teachers’ preferences for digital resources. He has served on the steering committee of PME-NA and received the Nadine Bezuk Excellence in Leadership and Service Award in 2019. He hosts the Math Ed Podcast (www.mathedpodcast.com).

Published by mesaofficerpresident on March 8, 2020

Published by mesaofficerpresident on March 7, 2020

Published by mesaofficercolloquiumchair on February 3, 2020

Abstract:
In this talk, I will discuss ways I have worked to support teacher noticing of student algebraic thinking. In particular, I will discuss a video club professional development I designed that included an algebraic thinking framework describing ways students might think algebraically, with the goal of encouraging teachers to attend to a broader range of student algebraic thinking. I found that preservice teachers who participated in the video club intervention discussed a wider range of algebraic thinking (i.e., connecting representations, modeling phenomena) than they had before the intervention, and they discussed this thinking on a more substantive level. I will then discuss two current projects that extend this prior work. In one project, I begin to explore teachers’ attention to multimodal (gesture and action) student thinking, as teachers engage with novel video annotation tools. In another new project, I explore algebraic thinking elicited in elementary classrooms as children program robots, and how teachers can learn to support this student engagement.

Janet’s research interests include teacher noticing and teacher responsiveness in the mathematics classroom. In particular, she is interested in how teachers attend to and make sense of student thinking and other student resources including but not limited to student dispositions and students’ ways of communicating mathematics. Janet’s work has been funded by the National Science Foundation, the Spencer Foundation, and the US Department of Education. Janet is a recent recipient of the NSF early CAREER award to study teacher noticing of multimodal student algebraic thinking. Her work appears in journals such as the Journal of Mathematics Teacher Education, Mathematics Teacher, and the Journal of the Learning Sciences, among others.

Published by mesaofficercolloquiumchair on October 12, 2019 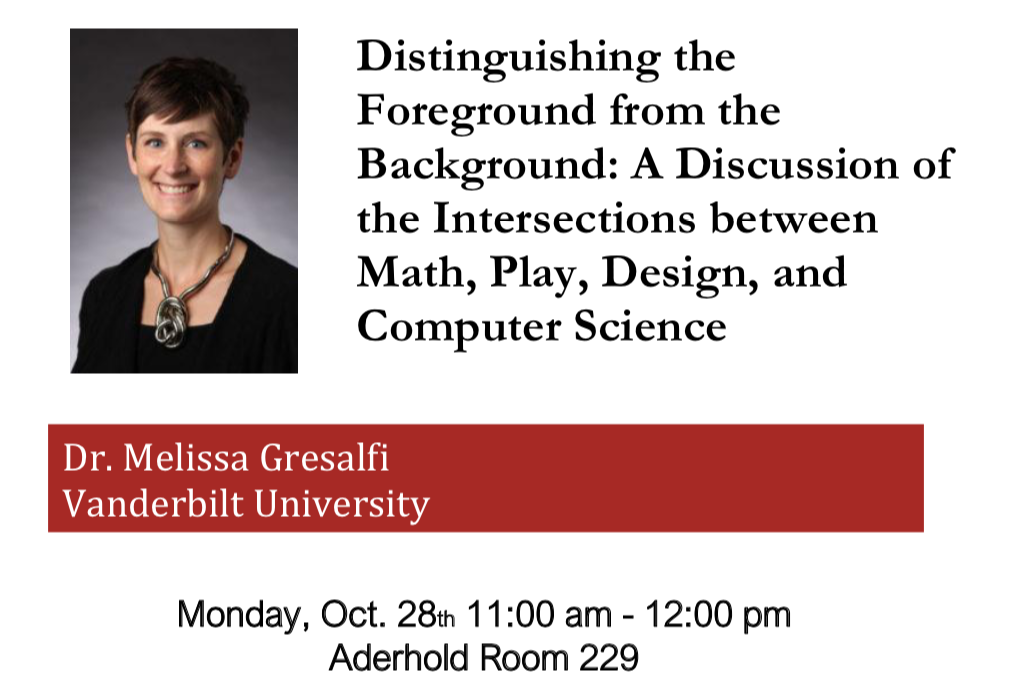 Recently there has been a lot of enthusiasm for integrating practices of Computer Science into mathematics classrooms. Although the reasons range from the hopeful to the pragmatic, we in fact know very little about how mathematical thinking might productively, or unproductively, connect with Computing. In this talk I will share findings from two rounds of design studies that sought to understand how these content areas, and their associated practices, might intersect, and ultimately, what the two fields have to learn from each other.

Melissa Gresalfi is an Associate Professor in Mathematics Education and the Learning Sciences, and Dean of the Martha Rivers Ingram Commons at Vanderbilt University.  Her research considers how to design learning environments that support students’ empowered engagement with mathematics. Her projects explore how tasks, social interactions, and norms and broader narratives support student learning and identity, with a current focus on textile craft, programming, and play. These projects share a commitment to understand how classroom structures and curricular designs create (or limit) opportunities for students to engage meaningfully with information. Gresalfi has served as PI or co-PI on numerous grants funded through the Gates Foundation, the Institute of Education Sciences, the MacArthur Foundation, the National Science Foundation, and the Spencer Foundation.

Published by mesaofficercolloquiumchair on August 24, 2019

Join us for a colloquium hosted by Dr. Paul Dawkins of Texas State University.

The title of his talk is, ”Novice students’ reasoning about proofs of conditional statements and the emergence of a meaning for conditional truth.”

Abstract: In a recent series of teaching experiments, we (with Kyeong Hah Roh) are investigating how students construct some relationship between a conditional mathematical statement and a proof of that statement. This line of inquiry is intended to reveal some of the preconditions for students to make sense of the logic of proof as it relates to their reasoning about particular mathematical content. The presentation shall focus on the issue of whether students can construct any reason why a proof of the converse statement does not prove a given conditional when both statements are true. We argue why this depends upon students developing some (content-general) meaning for conditional truth and we present three such meanings as exemplified in our data. The presentation shall explore the challenges and opportunities of these three meanings for the purposes of teaching logic

Dr. Dawkins earned his Ph.D. from the University of Texas at Arlington in 2009 under the direction of James Alvarez. His dissertation work focused on student apprenticeship into defining practices in an inquiry-oriented real analysis classroom. His subsequent research has continued to focus on mathematical practices, inquiry-oriented instruction, and proof-oriented mathematics. Other projects have focused on axiomatizing in geometry as well as language and logic in introduction to proof. Many of Dr. Dawkins’ experiments use guided reinvention to design novel instructional sequences. By observing how students may be guided to reinvent key mathematical ideas, one can learn about the cognitive shifts that are necessary for learning.

Published by mesaofficerpresident on August 22, 2019

Want to learn about how to fund your next research study? Do you know what goes into the process of grant development? Or what resources are available when writing a grant? What about how to communicate your grant writing plans when you’re on the job market?

Grace Thornton, manager of the research development office in the College of Education at UGA, will answer some of these questions on Monday, September 9 from 2 to 3pm. Location will be announced.

If you have a question that you want Grace to answer, please submit your question below.